Recently whenever I play my 106, my speakers’ woofers are really exerting themselves. They wildly go in and out. I looked at the output of the Juno with a frequency analyzer, and sure enough there’s DC coming from the synth. Turning up the HPF to position 2 eliminates the DC.

This Juno has all new filter/vca chips and sound generator chips, and I calibrated it less than 6 months ago. I didn’t recap the power supply or anything else.

Any idea where that DC could be coming from?

Check the power supply output is as expected?

What you are saying does not make much sense:

Even if there is some DC on either output - the inputs and additional circuitry on the power amp would stop that DC anyway.

By the way - you can simply use a DVM in DC mode and look between sleeve and tip and/or sleeve and ring to see if there really is DC.

I would rather suspect the cone surrounds on your woofer have perished … maybe … which would make the woofer cone behave violently going in-out with the restrictions of the surround. If the surround has perished then the speaker will eventually fail as the coil keeps on scraping on the magnet.

I doubt that the speaker surrounds are busted, but I’m not ruling that out yet.

When I look at the signal with an FFT analyzer (on my computer), then there’s something going from 10Hz to about 20Hz, and it’s pretty strong in amplitude. I’m attaching a picture. 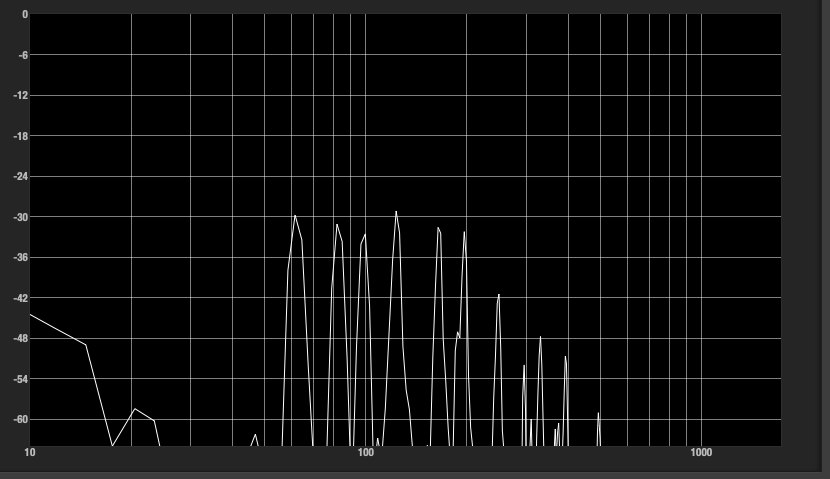 Even if that’s not DC, it’s still a super low frequency that freaks out my speakers. These are my studio monitors and they have pretty big woofers. Other synths don’t cause the woofers to move like that, nor other music that is rich in low end. It’s something with the Juno, even if it’s not actually DC. 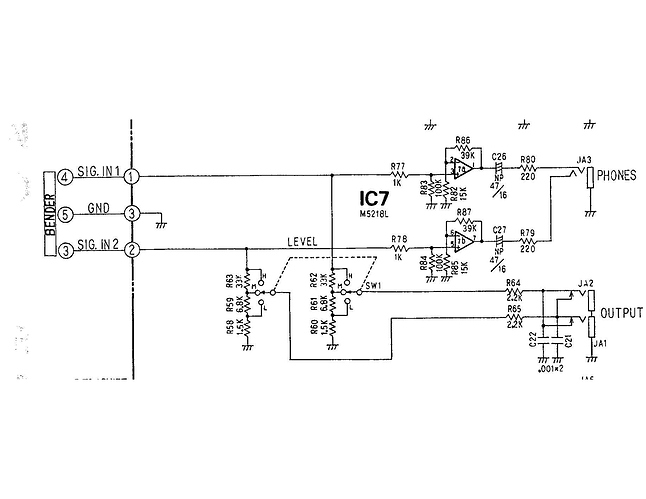 I did a little more digging around and what I’m seeing in the FFT is actually the LFO. I don’t know why or how, but it seems to be leaking into the audio signal. Moving the RATE slider changes the frequency I’m seeing on the FFT. Also, switching the PWM switch from LFO to Manual removes the LFO signal from the output.

I feel like this is potentially even more complicated than just some DC on the outputs. Any idea what this is about? Is this at all a normal behavior for the 106?

Sorry for the egregious bump, but any idea what causes the LFO signal to leak into the the audio circuitry? Maybe that’s actually normal behavior or as mentioned in another thread, a firmware bug?

I am tracing back the circuit … how much can you help in fault finding?

There is a possibility of a GND issue or PSU issue here. But we will need to trace backwards …

I have basic understanding of circuitry and I have an analog scope, so yeah I can start troubleshooting. I’ll connect a scope to the voltage rails - what am I looking for? a certain ripple?

get service manual from here:

Step 2:
Put scope to the output jack - can you see the issue of that “DC” on the scope?