I bought a fairly clean looking E-MU XBoard 49 on ebay - the price would have been great if there were no problems - it wasn’t much more than a parts one probably sells for -$60.

The problem is some white keys when pressed also trigger the adjacent black key and if that happens usually the black will trigger two notes also. It’s only on three of four pairs of notes such as in the lowest octave the F# and G.

What’s odd is it wasn’t doing it consistently. I played on it for a while before I started noticing it. Almost as if it went into a state that causes it rather than something mechanically an issue with the keybed. I took the keybed out and cleaned the contacts which leads me to my second question:

I’ve cleaned the contacts on a bunch of midi keyboards and never had the issue I’m encountering. The rubber nubs that hold the contacts to the board are really hard to get back in. I usually gently push them in with a thin steel rod that I sanded the tip so it’s as flat as possible with the edges smoothed. This time the nubs are much wider than the holes they go in and it takes so much force that I’ve poked through a couple. I stopped on the second and decided I better either buy new contact strips or figure out a way to lubricate the holes and perhaps find a better tool .

BTW, the keybed was fairly clean - I didn’t see any reason it would double up notes.

Thanks in advance for any advice.

PS. One other issue is the four button press to reset the keyboard to factory isn’t working.

I carefully lubricated all the holes that the rubber contact strip nubs go into. I used a small paint brush and applied a tiny amount of white silicon lubricant to each hole. Then I was careful to press each nub in so it pushed any excess silicon through to the back of the board. I was able to push the nubs through by pushing and manipulating the little bit that would come through to start. I’ve decided these strips should be replaced. Is this happening because the rubber is very old and so degraded?

It would be great if the strips can be sourced. 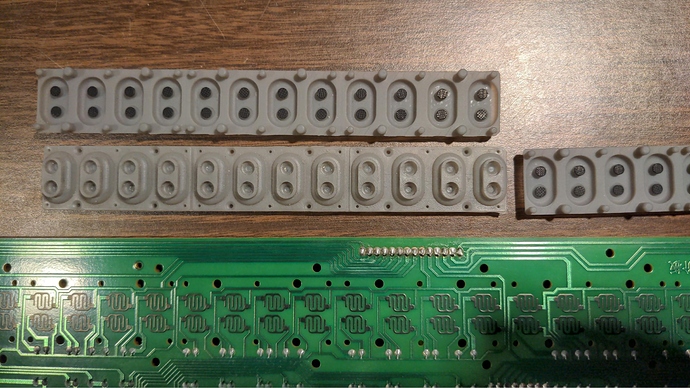 Forgot to mention how I fixed the two nubs I broke off. I put a small wire with a 1mm 90 degree bend on top through the hole and then dropped a dab of hot glue from the bottom while holding it tight. When the glue solidified I cut the wire off at the level of the glue dab. That attached them as well as the expanded rubber of the nubs.

The keyboard is now working. I had that strip (with the note that worked when pressing on the bubble contact itself but not when installed onto the keyboard) upside down!

BTW, I think the note doubling was due to the smaller of two ribbon cables having loose/failing connections. This keyboard had definitely been worked on before and I think they were a little rough with the keyboard. I used solder braid to remove the solder joints and clean up the points and then cut the ribbon cable and stripped and tinned each lead and reinserted it and soldered each back in.