My Ensoniq ESQ1 stopped outputting sound and the screen no longer fully powers on. I replaced the battery in 2016 so I suspect that the battery is still fine. I’ve included a picture of the screen below. If I leave the keyboard on for a bit, the green blocks on the screen slowly start to fade to black. Was hoping that someone could point me in the right direction. 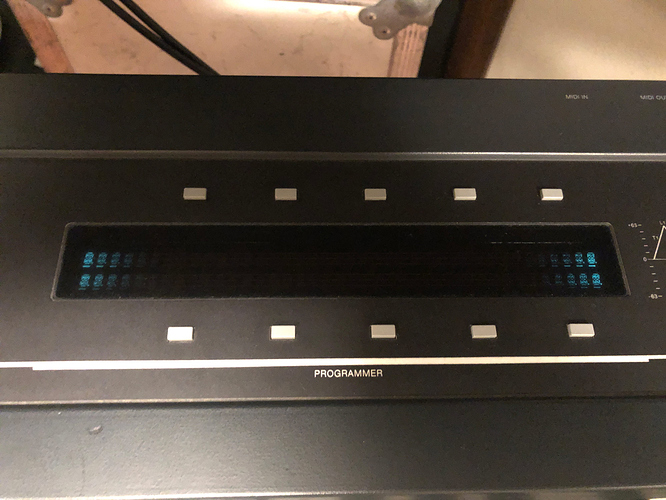 check all sections voltages and fuse.

Forgot to say in the original post that the fuse is fine. Thanks for the suggestion. I’m pretty green when it comes to electrical stuff so I will do some research to make the necessary tests.

take a look at display issues on you tube bradthx and other guys is the psu capacitors the original? if yes those guys are going to clarify some of those issues from simply reseating a removable eprom chip with a contact to be clean. good luck

Did you ever figure this out? My SD-1 just started doing the EXACT same thing out of nowhere.

Always the first thing to start: measure the supply voltages? Unfortunately the servicemanual does not provide schematics…

Did you reseat the eproms chips, use a little of deoxi5 d5 a little goes a long way in a 5 ounce can. use it on a qtip or a very light sprits for the contacts, a guy on YouTube had the display issue and reseating the eproms the display was back running normal. don’t forget to ground yourself with this type of work are you the original owner of the ensoniq esq-1 if not we don’t know how the original owner stored his/her keyboard. I acquired an ensoniq sd-1 and the owner probably had it in a garage or basement with a lot of moisture after a full clean up of air to blast off all dirt out of the circuit board i then used the deoxit d5 on the contacts. rust was the key giveaway inside and the outside screws the keyboard forgot to mention the crud of dirt that took a sizable quantity of sanitizer wipes for the outside cabinet…mmm! And this is what guitar center had waiting for me this is their idea of good condition. So i refer to search ensoniq esq-1 and those guys will explain in detail about that problem you are talking about. not everyone keeps their equipment in excellent condition I kept my esq-1 on a ultimate keyboard stand and use a dust cover when it wasn’t in use so good luck and keep us abreast of your progress.