No one knows more about the Ensoniq Mirage than Syntaur…and probably some of you (synth fans). I´ve got a Mirage (the rack version) and for years I’ve been thinking about buying the memory cartridge expansion, since the on-board memory is extremely limited.
I think the timing would be tighter, using the built-in sequencer (when programming drums), compared to an external midi sequencer (daw).
HAs anyone of you tried it? Is it worthy?
What about the Soundprocess OS? Does anyone use it currently?

You are right in that the onboard sequencer is extremely limited - and unfortunately, the expander does little to help that. It merely gives you some extra note capacity, but there is still no way to edit what you record, to sync it to anything else, to do multiple tracks, etc. It will not help timing at all - it merely records more of the same. It is at best a ‘scratchpad’, where you can quickly record an idea for later development - later as in using a better sequencer…

And even if you DID want the expander, would you be able to find one? It would be tough. The expander port is much better used with the Input Sampling Filter - which is useful if you are making your own samples. (Really difficult to find these days also.)

Soundprocess, on the other hand, is something that you may indeed find quite useful. While I have not used it personally (except to listen to the disks that we sell), lots of people do. And it really adds some nice features to the Mirage. The sounds themselves are distinctly Mirage-ish, and you can have 32 of them loaded at once for instant use.

thanks everyone for the feedback and help.
I’m thinking about getting the Soundprocess option…
Cheers

Soundprocess is neat and I believe you can sample your own wavetables into it as well, but it’s a pain to program from what I recall (not that you could say the Mirage factory OS is easy to program on its own)

Personally, I’m fond of the 8-out mod run through a mixer for stereo effects, but that’s a bit more involved. 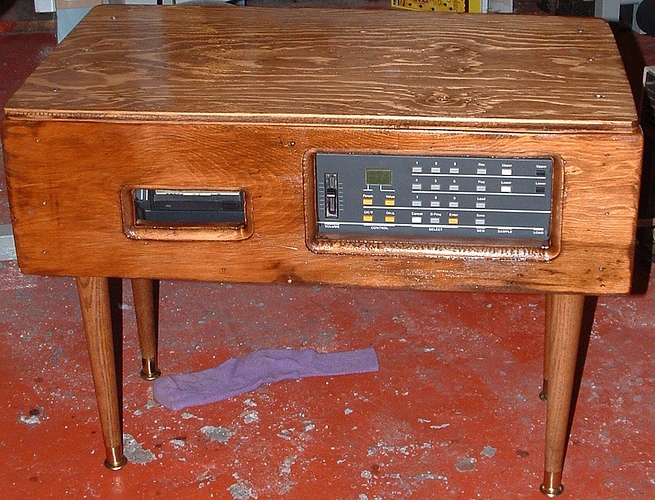 Probably not the type of Ensoniq Mirage mod you’re looking for but I’m willing to bet you’ve never seen an Ensoniq Mirage coffee table before, have you?

I made this in the late 90s or early 2000s. I had a friend who had an Mirage that his cat peed on and it didn’t work at all. I was eventually able to get it up and running just by gently and methodically cleaning the motherboard but it had one problem. Every 8th key on the keyboard wouldn’t work. I thought it might have been something wrong with the diode matrix on the keybed so I removed the keyboard and swapped it out with the one from my own working Mirage. Still didn’t work. So I figured it might have been a damaged chip on the mother board. There were a number of chips I could easily identify like the mixer chip, the filters, the CPU etc and figured they weren’t going to be the cause of the problem so what I did was swapped out each chip I couldn’t identify with the corresponding chip from my working Mirage. I found the chip that was dead back back in those primitive days of the early internet I could not source a replacement for it (didn’t know about Syntaur back then). So I had a Mirage that worked fine as a MIDI module but couldn’t be played from its keyboard so I thought I’d stick it in a rack mount case but lo and behold I guess the Mirage rack used a different motherboard than the keyboard version did because the motherboard on both the Mirages was too big to fit in a rack. That’s when I decided the world needed an Ensoniq Mirage coffee table.

A few years later I gave my fully working Mirage to my son (along with an old Atari ST computer) and I kept the Mirage coffee table which I used as a midi module. A few years after that the Mirage I gave my son died completely and I could not get it to work again so I cannibalized it for parts just in case my coffee table stopped working. I haven’t used it much lately but it’s still going strong.

The one mod I might perform on it is to replace the floppy drive with and SD card floppy emulator because I know it will only be a matter of time before either my floppy disks die or the floppy drive dies.