Hi, I installed a new battery in my Ensoniq E-Prime keyboard and it was my understanding that the internal sounds would remain intact.
After I installed the new battery, then turned on the keyboard the screen is just blank now??!?
I followed the next steps to re-initialize which was to hold down the two #9 presets along with edit/seq/preset button but again blank screen!??
Any ideas on how to return to the internal sounds?
I even went as far as to reinstall the old battery and boot back up but again screen lights up but is blank green screen -
I press some of the buttons on the keyboard and the screen does work but it only shows the button number. For example “button 22”, “button 10”, etc… any ideas?!?

Thanks in advance!!
Mike

Well… it looks like I figured out or solved the issue. I’m posting my own response just in case others in the forum or community come across this same issue with Ensoniq KT or E-Prime series keyboards. I’ve posted some photos as well here on battery replacement from a soldered 3V battery to a coin holder replacement. This is a much easier solution for future replacement of coin batteries. No more soldering. Simple replacement.
But to solve my original issue I found that the little diode next to the battery DOES NOT get soldered onto the “+” positive of the battery! It just simple lays on the board unconnected. Once I did that, my keyboard boots up fine without any issues and has all internal presets/sounds. Again see photo after install of battery wiring harness. 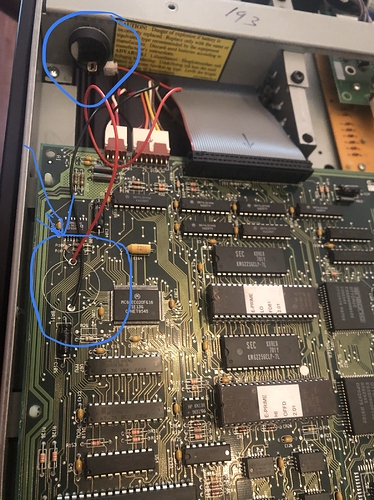 Hello Mike! I am getting back in to Midi and have a E-Prime with dead battery. How to you get to the battery to do the replacement? I have dumped data to pcmcia card.

Hi Glenn…
I have 3-4 photos that i can share with you on the replacement I did for the battery. You can purchase a very inexpensive replacement on line that has two leads for positive and negative (red and one black) wire with a battery coin housing. You can mount that with the Velcro they provide to the inside of the keyboard for easy replacement in the future.
If you want to discuss or share phone # or email, I can send you the photos of what I did.
Let me know, Mike

That would be great! Any details or photos wold be very much appreciated.
Sorry for the delayed response it has been a strange year and just now starting to get back to normal. Most of my gear is old from early 1980’s and in need of attention.