So I’ve been loving my Juno 106 since it arrived, and I noticed something. Not strange… not broken… just… different.

Also every picture of a Juno 106 I’ve seen look like this: 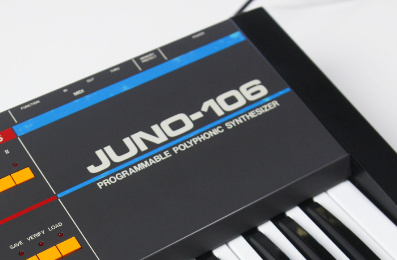 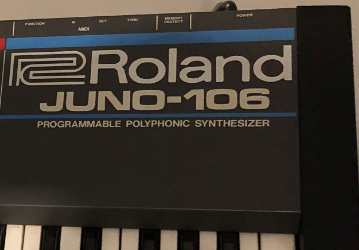 Just curious if anyone knows why mine has the actual Roland logo on the top right, while some do not?

I can’t say I’ve ever noticed that Roland logo like that on a 106. It almost looks like a sticker than something Roland did.

You may be right. It’s definitely raised more than the rest of the printing on it. I never even noticed that before. I thought maybe I had a different “release” or “model” or something. I’m not the original owner (not sure who was) so no way to tell.
Thanks!

I think ya’ll are thinkin too much…lol… All companies do things like this, substituting a different part or omitting somethin due to a contractor not delivering or in this case maybe the silk screen got damaged and they had another on hand that was like second choice. If it annoys you just play it in the dark, lol or you could send it here and I’ll play the foo out of it… One of my grand synth mistakes was tradin my 106 back in the mid 90’s to upgrade. 20/20 hindsight and all that. I have since replaced it with a Jx8P ,but it damn sure ain’t even close… There an ep of synth wizards that they hot rodded a 106 and some of it was foolish IMO, but they did repurpose a jack in to get at that chorus the 106 has. I’ve tried alot of stomp boxes and processors to substitute, but not been happy. but did settle on an Alesis quadraverb. If anybody has a quad for sale ,workin or not, get at me. I want to monkey around with one and have to have one in service at all times. Want to make it a dedicated box for a Rhodes. If you are thinkin about Rhodes upgrades ,look at the Avion Studios Retroflyer, theres nothin better…

No, it’s not annoying… more of a curiosity than anything else. I feel so lucky to even HAVE this Juno 106. Been playing the hell out of it since I got it. I’ve been throwing together some retro 80’s tunes, using nothing but the 106 played manually, plus a sequenced percussion track. Finishing up a popular Thomas Dolby at the moment… have been “blinded” yet. grin