I’ve been working on a korg dw8k that is having some issues. In poly mode the 7&8 voice are silent. It’s not a key bed issue as in unison mode all keys work. I’ve been following the service manual replacing the logic chips, multiplexers 4051, 4050, 4066, 74hc32 as well as op amps, but the voices are still not triggering. Any one have any experience with this? Could it be a diode that has popped? I am assuming that these voice chips don’t go bad but am I wrong about that? Any help would be great I’m starting to hit a wall on this unit.

This will be a long haul me thinks!?

You will have to work backwards from right to left on the below - but you will need a scope to see selections and a DMM to measure static pin levels. 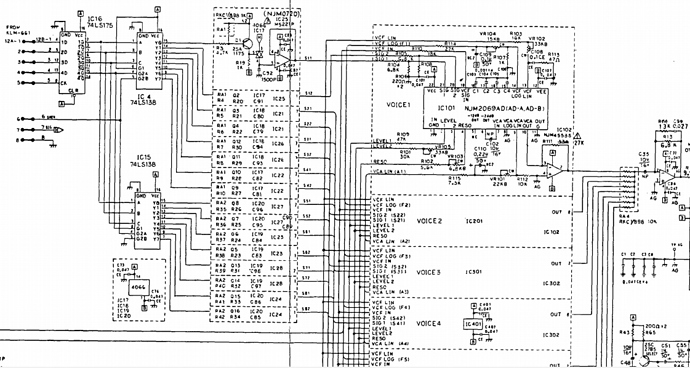 So you now can go and start swapping bits or measuring and it will be tedious.

Also - I read that the RAM can be cleared and reloaded with diagnostic data. SO there is a possibility that some RAM data is lost … which may need to be reloaded.

Thanks for the response! I have schematics and have been replacing ic in that general order. I’ve swapped just about every chip in the 7&8 voices audio path on the voice board. I’m looking at the CPU board now or even some diode being out so the voice is never triggered. Help?!

I spent a lot of time looking at that circuit - the following can be extracted:

i.) If we have a physical device containing 4 individual circuits (ie quad op-amp) what are the chances of two circuits failing and the other two are OK?

ii.) If we have two physical devices each containing 2 or 4 individual circuits (ie. 1 dual op-amp or quad op-amp) what are the chances of one circuit in each device failing but the other circuits in each device are OK?

iii.) If we have two or more identical devices, what are the chances of two of them failing in exactly the same way?

With that in mind and looking at the below circuit - we concentrate on all the devices with yellow highlighting with coloured surrounds AND at the BUS’es between the voice chips and the selection logic (TEAL surround);

1. all voice chips that are connected to the BUS’es in parallel (ie BUS connection with a DOT connection) - then we either have both VOICE #7 and VOICE #8 chips failing exactly the same way or alternatively if any of the BUS’es would have failed then ALL voices would have an issue (whatever the selected parameter is)

2. If we look at the selection of S11/S12 … S81/S82 - which are NOT a BUS but individual connections - then we only need to look at YELLOW/Blue (TWO separate devices), YELLOW/RED (two separate devices and each also servicing a different Sx1/Sx2 set) and YELLOW GREEN (all individual transistors and ONE resistor array across all the Sx1/Sx2 sets selected by IC15 - 74LS138)

3, If we look at the buffer op-amps IC6, IC10 (YELLOW/Light BLUE) or IC7,IC11 (YELLOW/PURPLE) we again have devices with 4 individual circuits spread across two entirely different sections.

NOTE:
This same analysis can be driven backwards further and it always comes down to the same two points - either multiple devices and/or multiple circuits - so YAMAHA engineers were clever enough to separate the paths to aid in fault analysis.

Based on that analysis I would suggest this to be a software issue rather than a hardware issue - maybe a faulty RAM chip or a corrupted software set?!?! 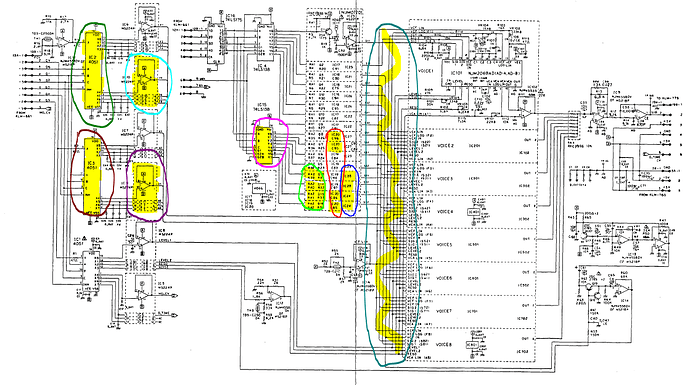 I’ve replaced all those ic and thought the same thing about the op amps. I’ll try rebooting the ram and see where that gets me. I don’t have a scope, I usually borrow one from a friend when needed, so I’ll have to hold off on that until post covid. I’ve even thought about borrowing a friend’s dw8k voice board to see if that points to anything. Thank you for your input and time. Kind of weird that there is so little info on these synths besides battery issues. When my juno60 was acting up there was too much advice on what could be the issue. My default is usually starting by swapping out the 4051’s.

Tried reloading the patches and still voices 7 & 8 are not there in poly mode. I guess I will have to get an oscilloscope to probe deeper. So frustrating!

So I had sometime and I opened up the board again. I was able to trace down an open on the voice board and that brought back voice 7. I’m now just looking at voice 8 that is dead. All the chips on the voice board are metering correctly. I’m starting to think this could be a bad ram chip on the CPU board. I’m able to play the synth on poly 2 and it’s not the biggest deal for that last voice to be dead but I really want to get this thing back to