Good evening, folks.
So I wanted to share with you all my latest acquisition, an Ensoniq VFX-SD. So far it is a bit of mystery. I knew this going in, but the strangest thing is that most presets have infinite sustain.

I have yet to crack the ~250 page manual, but I was wondering if anyone can guide me to figure out if this is a real problem or if it’s a programming thing I can resolve. I did edit some of the envelopes but it didn’t solve the problem/ issue. Though, for some presets like piano, etc. I didn’t encounter this infinite sustain issue.

I’ll crack the manual tomorrow, but any advice would be much appreciated!

I just picked up a VFX myself not too long ago. I don’t much about the synth itself, but infinite sustain usually indicates an issue with the pedal (if there’s one plugged in), the jack, or the PCB around the sustain pedal jack. If you have a pedal plugged in, check to see if it’s a normal-open or closed model. Ensoniq synths usually use normal-open pedals. If you don’t have one plugged in, try plugging one in while the synth is off, depressing the pedal, and then turning the synth on. Sometimes this can reverse incorrect sustain pedal behavior.

Hey thanks for the suggestion!
I don’t have a pedal unfortunately. Maybe I can jury rig something with a standard instrument cable? Don’t know much about sustain pedals. Can you recommend me a normal-open pedal I can purchase on the cheap? 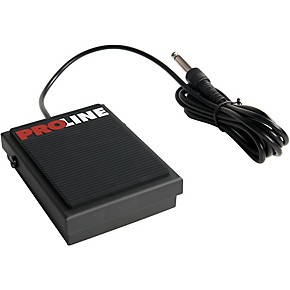 Shop for the Proline Standard Metal Sustain Pedal and receive free shipping on your order and the guaranteed lowest price.

I use something similar to this. I think it’s actually an older model. I believe Syntaur also sells pedals.

You could also take a regular mono instrument cable and use a wire to short the tip and ring sections to close the circuit.

This one would also work. It actually has a polarity switch to select normal-open or normal-closed.

Great!
I may give that a go tomorrow.

Thinking about it now, I suppose it would make sense that an infinite sustain problem wouldn’t naturally occur in a piano preset or one of the drum presets given their natural envelope. This issue only happens on bigger pad like presets (angelsbreath or saw o life)

Ensoniq (and Korg and others) use a normally-open type pedal. The Yamaha pedal mentioned will be opposite polarity (Roland pedals also) - it will sustain UNTIL you press the pedal. The sustain pedal jack that is used in the VFX is a switched jack - I can’t think of why it is switched, but if something has messed up with that switch part, it could cause everything to sustain.

Just plug a guitar cable into the sustain jack, and see if that cures the problem. If it does, it’s definitely an issue with the sustain circuit, and nothing to do with the voice circuitry.

Thanks, Sam!
I’ll try that when I get home.
Glad to hear from the man himself!

It worked!
I plugged in a guitar cable from the out into the sustain jack, played a note, and it did the trick. I was a little hesitant about the signal going into the sustain (i have no real electronics experience), but all seems well!

Thanks Sam and Justin! Now to dive into this beast

I actually meant just plug a cable into the sustain jack, and leave the other end dangling (not plugged into the Output) - but no worries, what you did is basically equivalent to that. It tells us that the switch in the jack is causing the sustain, and this likely means that you will need to replace that jack. Unless…

Perhaps there is a software glitch that could be causing this. You can reinitialize the keyboard, and clear up any glitches, so it’s worth a try. Here’s the scoop:

_Reinitializing the VFX, VFX-sd, or SD-1 will reload the operating software into memory, taking care of any glitches that may have occurred in the software. This is a good thing to do if operation has become erratic. Reinitializing also erases the programs in the internal banks, erases any sequences in memory, and removes the sequencer O.S. from memory, so be sure you have all of your programs, sequences, and other data saved before you reinitialize. _

To reinitialize the VFX, VFX-sd, or SD-1, press and hold the Presets button, and while holding it down, press the upper left “soft” button on the display. This calls up a screen which reads “ERASE ALL MEMORY AND REINITIALIZE?” Pressing the soft button over “YES” will complete the procedure and reboot the keyboard. All of the internal sounds will be erased and replaced with the ROM sounds.

If reinitializing does not cure the sustain issue, you can plug in the correct type of pedal, and it will probably work exactly as it should - so you’ll only have an issue if there is nothing plugged in to that jack. In other words, you can always have the pedal plugged in, and live happily ever after. Or, you can get the jack replaced, which will require removing the main board and soldering in a new jack - so that’s probably a job for a tech.

Thanks for all that, Sam.
I did try plugging in the cable dangling at first, but nothing happened. Infinite sustain still. I then figured some electrical signal needed to be sent in order to open/close (disengage? IDK the terminilogy). Nothing is currently plugged in back there, and the issue seems to be resolved. I’ll look into the internal banks and see if there’s anything cool leftover from the previous owner. If things go sour, I’ll try reinitializing.