My understanding is that the caps in old power supplies are the main problem with vintage electronics and that the lower voltage mainboards tend to run fine over the long haul as long as they are getting steady clean power. Servicing power supplies can be dangerous for guys like me who just replace batteries and displays. I’m curious if you can just use an off the shelf external power supply to bypass the internal and can be easily replaced as needed? Seems like the modifications would be much easier to make than trying to rebuild an old power supply and you don’t have to muck around with high voltage.
Does this make any sense?

Completely dangerous. Capacitors time expire because the electrolyte in them is corrosive and eats the internals out, then leaks though the seals. All vintage 80’s and 90’s caps have time expired.

First rule, is if you are not sure of your abilities to de-solder and replace caps, find a proper repair shot to do it. You can’t just replace caps without knowing they type and what purpose they serve. Decoupling noise, filtering, or timing. The wrong cap in the wrong place can short irreplaceable ic chips. Contact your local music shop to find a tech who can service the synth for you.

The wrong cap in the wrong polarity can cause explosions (look it up and see what happens when you apply power to an electrolytic capacitor backwards!) Dangerous indeed! https://www.youtube.com/watch?v=4yZxNKyd_lM
Start around 02:55 for the exploding cap… and it’s a small one!

My question is about replacing the power supply with a new external one, not repairing the old one. I’m wondering if this is possible and why people don’t do it?

I was looking at kits from DIYRE and thinking about building one. I noticed that the power supplies were all off the shelf and not in kit form, so you don’t have to mess with mains electricity. That got me wondering why we mess with power supplies at all? They’re not important to the sound character of the synth. Just replace them.

A lot would depend on what the power requirements are… voltages, current, that sort of thing. An old PC power supply might provide everything you need, and would be an economical and SAFE option.

Way too many variables involved. Very few power supplies just need something simple like +/- 12V to run. Nevermind that there are some supplies that need to supply very high currents, as well as higher voltages to things like VFD’s.

It’s simpler to just fix (or have someone else fix) your power supply in the machine you have.

I’m going to buck the trend here and say that replacement of entire power supplies is possible, pretty safe and, in some cases, a nice upgrade. But applicability varies widely.

Some power supplies…like the one I’m currently battling in an Eventide H3000…are pretty impossible to replace in whole as a drop-in. Most of the PSU is integrated on the main board. The nice part is ones like this tend to be very simple.

First thing I did when I got my Emax earlier this year was replace the PSU that was literally cooking off the panel overlay above it. There was a perfectly suited MeanWell supply available…just needed some thought on how to attach the Emax power Molex to the supply outputs.

I have a Focusrite ISA 115 HD with a bad PSU. Conventional wisdom is to toss those for a new one. Granted that’s far simpler as the PSU is an external unit…

But in many cases manufacturers did a few things when designing whatever equipment they produced…keep the PSU separate because of heat, replaceability, traceability, and most importantly to keep the costs down. In many cases PSUs were off the shelf items, as were many components within the musical equipment themselves.

You’d no doubt need a service manual and some conversations here…but there’s a decent chance a drop-in exchange of your PSU could be relatively easy. Post it here and let’s look.

Oh…for the curious the replacement PSU for an Emax I or II keyboard or rack is a MeanWell RPT-60B. Can be had for around $21. Runs much cooler than the standard unit. Requires no modification but it’s smaller than the original so you need to make a base for it to fit the PSU Mount and you need to modify the existing wiring harness.

Or there’s a guy on Reverb who printed up a bunch of PCB bases that he drops a MeanWell on that are a direct swap…remove the old unit (one connector, 4 screws), drop this one in. $125. Big markup but fair given you know the wiring is right and takes 10 minutes tops.

Hi, thanks for your response. I have some old synths which still work fine but I know their day is coming. The Ensoniq ESQ-1 is my oldest one. I know the PSU is at least separate, so getting to it without bothering the mainboard would not be a problem. I wish I knew enough to dig into it and refurb it myself.

But the unit which prompted my original question is TC Helicon VoicePrism. It seems to have to ‘warm up’ with a blank screen for several minutes before it starts working. I was told this was probably a power issue. I pulled the PSU to see if the caps were leaking or bulging (which is all I know to look for), but they appeared okay. However the PSU looks like it is probably just as easy to replace than fix. It says it’s an Analog Vision 41202-00600.
I was told not to mess with them as a novice due to possible shock, so I took some photos (below) and screwed it all back together. You can see the connections in the photos.

Can you see if there are any specs on the PSU itself with voltages? I cant find a spec sheet on it. Sometimes the pins or solder points on the output (the connector you removed) are labeled…or on the other end of the power harness on the main board.

That in-line resistor on that power harness is interesting…and there are still some power related items on the main board.

Also while you have it open disconnect and łreconnect (one at a time) all of the cable connectors inside to make sure one didn’t shake loose.

Sorry to shift gears on you but the VoicePrism is in my rack and opening it up again means tearing the rack down.
But I have a better power supply issue at hand. My Samson SM10 mixer started blowing fuses. I opened it up disconnected everything from the power supply and when I turn it on the power light goes on and then fades out as the fuse blows. So, sounds to me like the problem is at least isolated there.
Included is a photo of the PSU. It’s a nice mixer and I miss using it. Any ideas? Thank you. 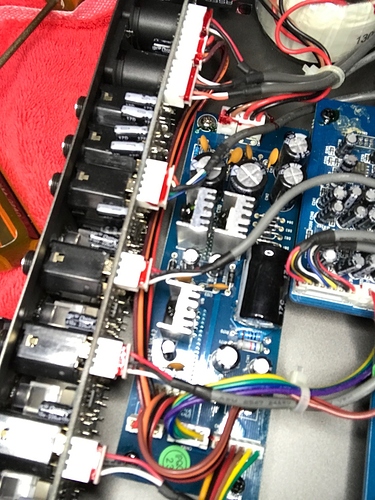