I recently obtained a free curbside KR 570 in great cosmetic condition. This is my first synth, but not first diy project. After disassembly, I find that 81 out of 88 hammers are cracked, with two in pieces, and several more on the way. As it is hard completely close cracks by squeezing together, it appears that this plastic shrinks after a couple of decades, and then cracks easily. I tried Loctite gel superglue on one hammer with cracks and it flowed in and between the lead weights and plastic overlay in some areas suggesting this might be adequate. It looks like a decade ago, one could get a complete set from Roland for about $300, but nowadays, it seems like the going rate is more like $1,000 for parts of unknown age on eBay. Since this was a free instrument, I don’t mind less than perfect repairs, if they hold up for a couple of years while I get acquainted.

Does anyone know what glue is optimal?

Has anyone tried cutting a jig out of wood to fit around the hammer top and bottom edges to hold things in the correct orientation while clamping while glueing?

The felts are quite depressed for the keys in the center of the keyboard. I have ordered the 1129 felts for the key stops, but the lift and hammer felts are currently out of stock.

Has anyone had success with using a razor blade to carefully remove a felt and then shift it right or left to bring the unused surface in position? Would Scotch double-stick tape work to re-seat or would contact cement be better?

The previous owner said it worked fine except for the broken hammer keys, so I am expecting the electronics to be OK, with perhaps an issue or two with dirty potentiometers that I might be able to restore with Deoxit.

Or should I just harvest spare parts, junk the rest, and buy a new keyboard?

Fixing this really depends on how much time or money you want to spend. Gluing the hammers is easy, just use 5 minute epoxy glue. The hammers look like typical ABS plastic. If you can, place the hammer in a small vice or some other jig to hold the cracked part closed, and cover both sides of the cracks with epoxy.

Hot glues or cyanoacrylate glues need to penetrate the material to bond well, but they don’t penetrate ABS plastics, they just sit on the surface. If you need to spot glue to hold the piece together that is ok, but then cover the crack completely in epoxy.

The best place to buy epoxy’s is fiberglass, boat repair, industrial plastics and supply shops. Next is hobby stores, or stores that sell radio controlled models. Small volumes of epoxy’s are usually much cheaper there. Some industrial supply stores have epoxy that mixes in a two part plunger style with a mixing syringe… If you use that type you must use all of it within the time limit (between 5 minute to 30 minutes) or the nozzle will glue shut and whatever remains in the plungers is wasted. Under no circumstances use any glues from a a dollar store! They are all time expired.

Try to keep the volume of epoxy used consistent between all keys repaired. Epoxy has a weight to it that can, if your sensitive to it, change the weighting of each key. Example, Some keys with too much epoxy on them may not come back up after being pressed, while the key next to it with minimal epoxy may be much lighter and respond quicker to presses.

Experiment with a few keys first, its always cheaper to replace just a few experiments than the whole thing. If you really love the piano, then a replacement set may be the better option.

Thanks much for your detailed reply! I the mean time, I have been (perhaps unfortunately, as you explain) glueing up the hammers with Loctite superglue. There are a lot of experiments underway, as 81/88 keys were cracked. What I feared was that 5 min epoxy would be too viscous to wick between the weights and the surrounding plastic very far before it sets, and I also worried that just gluing the crack edges would not be strong enough to keep the crack from reopening once clamping was released (but never did the experiment). The thinner cyanoacrylic glue penetrated and wicked by capillary action between nearly the entire surface of the weights and the surrounding plastic. While this joint may still be weaker than epoxy, I am hoping that the large surface area may provide enough strength to hold up. I did make wood jigs the same shape as uncracked hammer profiles and use these to generate parallel clamping surfaces for my screw clamps. Clamps are left in place overnight. I am over 50% finished and can detect no difference in action attributable to height differences - possibly due to cyanoacrylic being lighter than epoxy. Abut a third of the hammers have cracks that have not opened significantly and are glued without clamping.

By the way, I was able to re-use the two felt strips that damp key depression by using a razor blade to separate them from the frame and then shifting them about 3/8" so that the keys now hit the felts in previously never-touched locations. I used two passes of Scotch #77 spray adhesive to supplement the remaining adhesive on the masked felts before reinstallation. It appears to have worked quite well. Perhaps in the future I will remove the keyboard frame so I can shift the felts that dampen the key return and the hammers, but as it is, this is making minimal differences in key height and damper noise.

In about a week, I hope to be able to hear how this things plays for the first time (not ever having heard this instrument before). I would estimate that this is about a 2-3 week repair job, limited by the number of jigs/clamps I am using (6).

Update: I just received 5 new black key hammers from British Audio and was able to remove some cracked un-repaired black key hammers to test the alternative repair you suggested. I used Devcon 5 min epoxy and applied it to all cracks, around both weight “rivets” and into the two other holes. I found that it wicked into the thin space between the weight and the overlaying plastic, but only about 1/2 as far as the less viscous Loctite superglue. I clamped as before and left overnight to more fully cure. After removing the clamp, I needed to aggressively sand off the excess hard glue on the opposing faces of the hammer before it would fit through the narrow slot in the keyboard frame. This was sometimes needed with the cyanoacrylic glue, but not always and with less work. I have not yet compared the strengths of the repairs. but I presume the epoxy would win out. The main disadvantage is the extra time to mix up the two components of the glue and the need to do this anew with each hammer repair. It is also harder to use a toothpick to apply the epoxy than to just squeeze it out of the bottle for the cyanoacrylic. I am suspecting that either approach would hold up equally well, but may depend on playing style and consistency of application. Time will tell - I’ll report back if any fail.

Time limited epoxy glues do not like to wick into tight crevices. Epoxy resin will under a suction, but that’s for boat building and aircraft parts production.

Some methods for getting epoxy to better infill a crack;
You can get it into cracks by slightly expanding and closing the cracks.
You can drag a thin sheet of paper in between the crack to drag the glue through.
You can take a Dremel drill to rough up the edges of the crack, making a v shape so more glue can get at the crack on an angle.

Here are a couple of photos - one photo of three of the worst hammers before repair, and one of a hammer with the cyanoacrylic glue wicked in between the weight and the plastic and squeezed back together in my wood jig/clamp setup. All done now and piano reassembled. It plays nicely. I am quite impressed with the sound of this 25 year old instrument!! 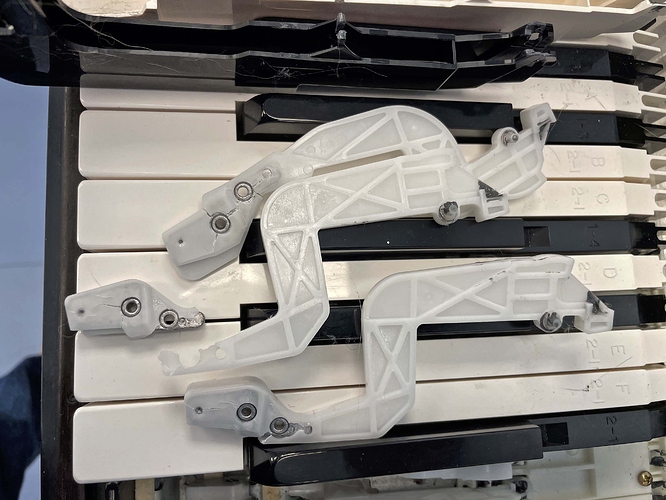 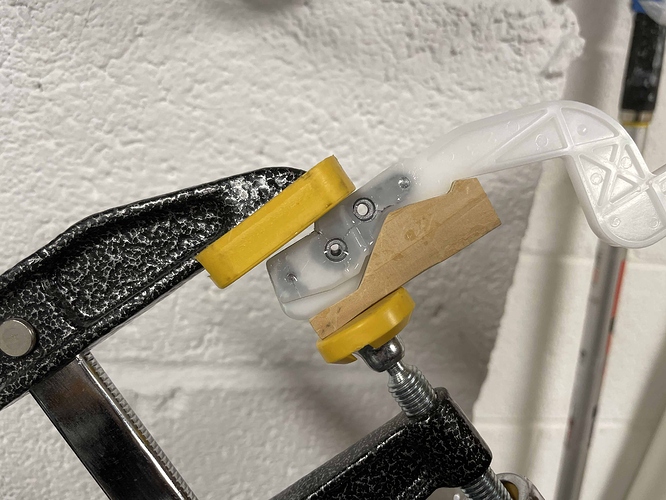 Only issue so far is one note that plays louder than its neighbors. Contact that has lost its pressure sensitivity, I guess.

I have exactly the same keyboard and fixed using epoxy. I applied a bead along the bottom where the crack starts. I have also put fiberglass cloth on some of them. I don’t play but my son says they feel good. None of the repairs have broken. Poor design on the part and a new one would break again.

Thanks for the report. Although I used cyanoacrylic glue, there have been no failed repairs so far. It was of low enough viscosity that it penetrated almost entirely between the lead weights and the surrounding plastic. All that surface area seems to be holding up well to date. I play pretty regularly - at least every other day, and all feels good. I am really enjoying this instrument and am impressed with the grand piano sound and feel.

The only funny thing that has happened is that occasionally, if I start playing too soon after turning it on, sometime in the first minute or so when I touch a key I’m startled by a loud sound like someone has pounded on 5 keys at once!