Hi, I’ve been trying to fix this one for a while, maybe someone here will have some ideas. When I turn on the unit the LM311 chip overheats and fails. This a common issue google tells me, but replacing the LM311 didn’t help in my case.
Things I’ve tried: 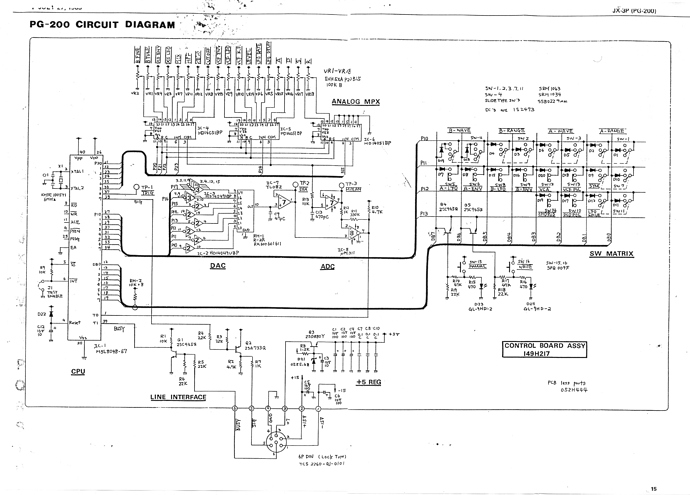 First of all: if the 311 is making troubles, then the first thing to do is to remove the CPU. If the 311 is dead it will send a voltage somewhere in the Range from -15 to +15 to the CPU which is most likely out of the allowed range of the CPU which is only 0V to +5V. It is a construction fault that there is no protecting circuit between pin7 of the 311 and the CPU (R10 does protect a little bit, but not really).

The next step is: remove all ICs and then check the supply voltages.
Check +5V at R10 and +/-15 at the solderpins coming from the 6pin DIN-socket.

Insert one IC after the other and each time after inserting an IC check all supply voltages. The second last IC should be the LM311, the last one the CPU.

Did you get an original Roland CPU? To my knowledge the CPU is not(!) clonable.

Thanks! I’d like to try this but unfortunatley I don’t think I socketed the CPU when I took it out, so it would be difficult to remove it. Hopefully I didn’t damage it. The other 2 ICs have sockets though.

Maybe just lift the pin on the CPU (TO pin 1) and look at the LM311 output?
LM311 is a comparator with open-collector output (emitter is pin 1 and collector pin 7 )
It should either be 0V or +5V.

Maybe the LM311 is sensitive to latch-up which causes overheating?

In a battery backup circuit from my job, the op-amp was latching up. Adding input series resistors solved the problem.

Thanks, I’m going to try these tips.

Ok, I had a chance to try some of these things out tonight.

Many thanks for the help!

i have the same problem! reading on diffrent websites about the IC8 replacement…

@adcbicycle thanks for your reply

No luck, I gave up and sold the non functioning pg200