Hi there! I’m refurbishing a Yamaha CP-11. Completed a full tear-down and very thorough cleaning. Several issues have been resolved just by getting all the contacts cleaned. However, the final issue is that when I play several notes at once, one of the keys will trigger several notes at once. A very dis-harmonic sound. It’s hard to say but the notes may or may not be adjoining notes.

Releasing the other keys and pressing the offending key again plays a single, normal note. Two or three notes may be played together. Sometimes more, sometimes less. There’s no set interval to the issue appearing, so it’s not like counting every six presses to expose a bad voice chip, etc. Very random. The problem also appears when forming chords to be played by the auto-accompaniment and the “mush” of notes plays along with the accompaniment.

I don’t have an oscilliscope and am not formally trained to test chips or anything. I believe the chips are all soldered to the board so not sure I can “re-seat” anything. I have the service manual for anyone who would like to see it. I’m not sure what chip manages playing several notes together and keeping them playing the proper notes but clearly something is getting confused when I play multiple notes.

Thanks for any help!
Dave Bailey

EDIT: I forgot to mention that this keyboard only has two main circuit boards in it, one larger one that handles the auto-accompaniment section and a smaller one that has the tone selector controls and EQ and master volume knobs. I happen to have a replacement large board (from Syntaur,) that I swapped in, and the problem still existed without change. So, I’m guessing whatever is happening is limited to the smaller tone selector board.

That is curious! Was it doing this before you tore it down, or did this just start when you worked on it? If it just started, that suggests that something might be plugged in goofy or something, but I can’t imagine what it would be…

Just to clarify what is happening, if you are holding down a chord, and then you play another note, that key plays the correct note plus all (or some) of the notes in the chord, right?

I’m at a loss as to what might be causing this - but try playing the CP-11 from another keyboard via MIDI. If it plays correctly, then I think you can safely say that the problem is isolated to the keybed or the keyscan circuitry. I don’t have the service manual, so I’d appreciate it if you could email that to us.

Sam,
It’s a weird case indeed. I don’t think it was doing it before, but it was so dirty that some keys didn’t trigger real well and I really didn’t play too fully on it before the cleaning. As mentioned, I swapped out the larger board with a replacement I had pre-purchased from you guys even before strating the work, in case I needed it. Strangely, it seems that this larger board has most of the main IC chips on it, so not sure what’s causing the issue.

The CP-11 is basically a glorified Casio home keyboard from 1981 or 82, with no MIDI or touch sensitivity. The most basic key contact system I’ve ever cleaned. Two little wire bundles from the key bed to the main board, and not even any IC chips or any real circuitry on the key bed itself.

I hold a few notes of a chord and pressing the additional note plays that note and what sounds like 2 or 3 adjoining notes as well. Big mushy sound. If I release all keys and immediate play the offending note, it plays normal. Last night during testing, it seems as if I can recreate some of the issues. Example, one way is playing three-note octaves with the 5th included. So C-G-C, F-C-F, etc. I went up the entire keyboard this way and a few of those combos triggered the issue every time. Then I did 3-note triads, major and minor. It’s weird which combos trigger the issue. I checked the wire bundles from the key bed to the main board and nothing is broken or frayed. I may go in and flip the key contact strip end for end, but it’s so basic it’s just a single contact under the rubber strip that runs the entire width of the keyboard. So probably not the issue.

I’ll send you the manuals now by email. Thanks.

I would definitely try playing it via MIDI, and then if that cures the problem, try swapping the contact strip end for end. It is a single strip of carbon, but I believe it has breaks in that strip in specific places, and if it’s upside down, that could be messing with you.

PROBLEM SOLVED! Thank you Sam! Your last comment about the rubber contact strip being reversed was the key to solving the issue. The more I thought about it, the more it made sense. My wife is teasing me because she knows I’m super meticulous when I disassemble something, taking pictures and marking pieces for proper re-installation. The CP-11 is SO basic and simple that I let my guard down and didn’t pay attention when I pulled that rubber strip off.

The Yamaha CP-11 is a basic 61-key keyboard with no MIDI, no touch sensitivity and no after touch. Super basic On and Off key contacts. There are 61 little contact surfaces on the circuit board and one long rubber strip with a single carbon “line” (contact) running the entire length of the key bed. It didn’t appear to make a difference which way it was installed, end-for-end.

However, as Sam noted, and that I didn’t pay attention to, was that this single carbon contact is broken into sections by little “slits” in the rubber strip. These slits are evenly spaced about every 12 keys. However, since this is a 61-note keyboard, there is a 13th note in the lower portion of the key bed, which means these slits are not located symmetrically in the rubber strip. Installing the rubber strip backwards as I did means the breaks in the contact are off by one key location all the way across the board.

When I flipped the rubber contact strip end-for-end and laid it next to the contact board, (picture attached,) you can see how the slits in the rubber strip now line up with the divisions in the key contacts. Such a simple thing that created all sorts of havoc when multiple notes were played. My guess is that when the combination of notes being played bridged this separation in the key contacts by the mis-aligned contact strip, all weirdness happened.

I’m happy to report this CP-11 is fully functional and clean and ready to be hooked up to my effects processors for some fun retro jamming and experimenting.

Thanks AGAIN to Syntaur for not only providing some parts to help clean this keyboard up, but also the forums to provide a sounding board to ask for advice. 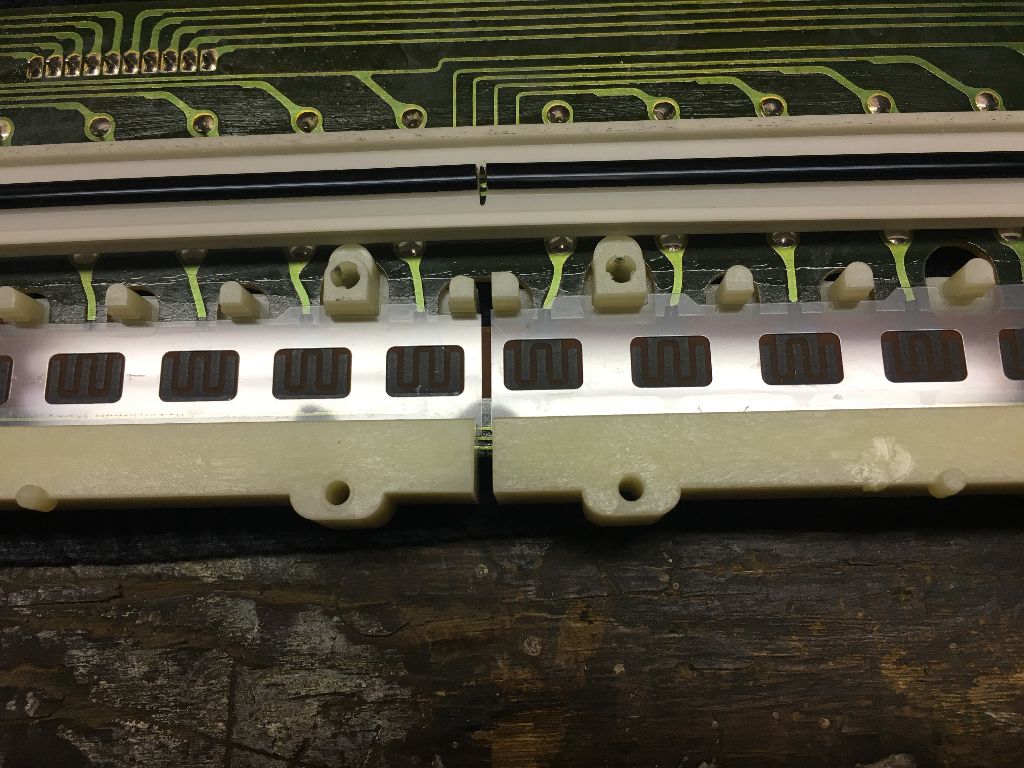