I have a DX7S that I got from Japan a while back. I repaired the unit and always had it running via a step-up transformer (100V → 120V) since I’m in Canada. The other day, when I was looking at the schematics, I noticed that there are virtually no differences between the Japanese/US/Canadian power supply boards. For example, the Japan/US models share the same transformers (TYA024), fuse resistors and other components (except for the main fuse, which seems to be slightly different in spec).

I think it’s safe to say that I should have no issues plugging it directly into AC (120V), but I was wondering if someone could confirm this please? Thanks!

Looking at the notes in the lower right corner, you will need to change out some components, not just the fuse. You said you were in Canada (yay!) so you need to upgrade the fuse to 2.0A ( no big deal), but you will have to bypass R2 (short it out, top of diagram right after D1), and replace R3 with a 6.8 ohm resistor (not sure why they included an amperage rating and voltage rating… makes it sound like a fuse… go figure). That might be your biggest hurdle. Although they show a different transformer, I fail to see the need to change that out. US and Canadian voltages and frequencies are the same. the US version seems to use a different version of L2, which would likely be very hard to find and replace. Other than that, the rest is as is. Best of luck! I hope you can do it.

Thanks for the reply!
Yeah that was kind of the confusing part. US and CAD frequencies/voltages are the same, that’s why I was thinking, if I can bring the board up to US spec, I should be fine.
What confused me a bit is that the CAD/US specs are shown to be different in the diagram.

In my mind it makes more sense to just bring the board up to US spec, which means just changing out F1 (fuse), C1 and maybe L2 (then again, the CAD spec of L2 is the same as the JAP version lol).

It’s easier to bring it to the Canadian spec, to be honest. I have a feeling replacing L2 will become a life-shortening endeavor. I doubt it is an off-the-shelf part.

True… Just a bit concerned about TYA024 vs TYA023. I wonder what’s up with that?

can’t say without seeing the actual specs… but I’ve Googled a bunch of different possibilities, and they seem to come to the same conclusion… there is no difference between a US and Canadian outlet, voltage or frequency.

Yeah same here. Thanks again, I’ll give it a shot and will post the results

replace R3 with a 6.8 ohm resistor (not sure why they included an amperage rating and voltage rating… makes it sound like a fuse… go figure).

Actually just wanted to confirm R3. It appears that the reason they included an amperage + voltage rating because there should be a fusible resistor in place (So a 6.8Ω 2A - 250V or 3W spec fusible resistor). Am I reading this correctly?

That does sound right, actually.

I don’t know too much about the details of this circuit, and I also don’t know anything about the technical regulations in Canada and the US.
Having said this, I 'd like to do the remark, that switching powers supplies usually work for a very wide range of input voltages. This is quite likely valid for this circuit too. But assumingly the regulations vary from country to country. So I think the difference in the circuits is owed to the national approval. But if you’d export a US-DX7 to Canada no one would ask about that.

That may be why the Canadian version uses a fuseable resistor. Seems like overkill to me, but hey… I don’t write the regulations, I just suffer under them.

You are correct - the circuit can handle a wide variety (within some limits of course - ie not 220V … 240V) of input AC voltages. The indicated alterations for Japan, Canada, US or for compliance to local requirements on noise and phase power backfeed into the grid - because of how SMPS circuits behave

I’m In Canada too, ignore the Canadian requirements and go by the US requirements. The Canadian power grid had some issues with power surges during winter ice storms decades ago which required some changes to power supply regulations. That’s virtually been replaced with X and Y class capacitors.

If anything both R1 and C1 should be fire rated and have a 250V minimum rating because running parts rated for 125V at 120Vs is 99.99% of their safety limit. Digikey’s parts search allows you to select lead spacing width to get exact fitting parts.

It’s been a while… would love to know how this turned out!

Sorry for the late repy. Due to the worldwide shortage of parts, I had a hard time finding the proper fusable resistor (I wanted to stick to the spec as per Yamaha’s technical guide). I finally got one and plan to modify the board tonight. I will certainly post my findings for those who are interested in performing the same modifications

So I ended up not modifying the power supply board yet, as I noticed something in the service manual that I’m not really understanding.

The DX7S service manual I have shows that on Canadian DX7S models, R3 is a 6.8 Ohm 3W fuse resistor. 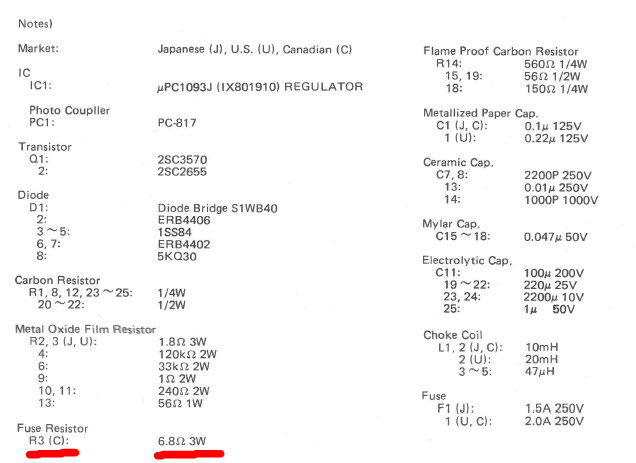 I bought a PR03000206808JAC00 resistor with fusible properties and I’m not sure if this would be the right component anymore. Just wondering if someone could clarify whether or not the resistor I bought will be up to spec?

You may search for “Fusible Resistor 3W 6.8 Ohm”. I find only search results in Germany, but I am sure you will find them in the states too:
it is a VITROHM CRS300JT-73-6R8AA