I have a Yamaha v50 keyboard which has some problems on the motherboard regarding the generation of the sound. when you touched the keys some sounds are heard mixed with a high noise similar to a White Noise.
Also sometimes it doesn’t sound random.
I can see here the entire operating system works correctly since all the functions are active and it can be used as a controller without any problem.
Another problem that manifested itself is that the drum pcm sounds are not playing.But this fail I don’t interpret whether there may be any relationship between the two problems.
About 10 years ago I replaced the battery with a new one and I put it back in its respective box until today trying to verify if I could repair the keyboard.
As it is a somewhat obsolete but easy to repair technology I would like to know if anyone has any idea regarding whether this failure could be linked to any particular component, perhaps an analog-digital and digital-analog converter or if it could be some component that I could be ignoring.
As I mentioned earlier the sounds are generated by playing the keys and apparently the tone generating operators are working since I can turn them on and off to test each sound.I would appreciate if Sam or any other member of this forum could help me to solve this problem since this instrument has a very sentimental connotation and I would like to be able to keep it running since I thank you all for your attention and collaboration, a cordial greeting to all.I forgot to mention that I could share the member’s electrical circuit and also share an audio demo to give them a better idea of ​​the problem.

I won to tell you some people in internet recommend to check the power supply DC and AC; there isn’t any problems about that, but discovered in these control some problem in tracks or lines of the printed circuit of the mainboard. I attach a picture.
I hope this is the fault. 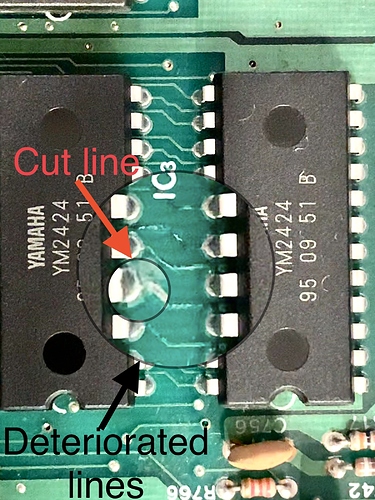 EUREKA!!!
This was the problem!!
I only had to do a jumper and the problem was solved!
Thanks!